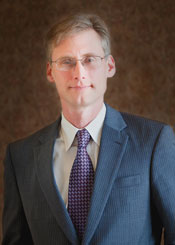 Eric Nelson is an attorney with more than 17 years of legal experience in a variety of fields. After nearly four years of private practice in Indianapolis, Indiana, he relocated to Casper, Wyoming in 2001 and began his Wyoming legal career as a Deputy City Attorney with the City of Casper. He has also worked for the Wyoming Attorney General’s Office and served two years as the Natrona County Attorney. For the last 7 years he has been in private practice, routinely handling all aspects of civil law, including oil and gas, bankruptcy and various business matters.

Mr. Nelson received his undergraduate degree in German and Political Science from Wabash College and his law degree from Indiana University, Bloomington. He is currently pursuing a master’s degree in public administration from the University of Wyoming.

In addition to his professional career, Nelson has been active in the Casper community. He has served as a member of the Casper-Natrona County International Airport Board since 2010. He is a board member and immediate past president of the Casper Area Chamber of Commerce and is the vice-chair of the Casper chapter of the National Alliance on Mental Illness. Mr. Nelson currently serves as the Vice-Chair and resides in Casper with his wife and four children.